Of all the choices facing you, none is more important than your choice of attorney. Attorney Adam Burke understands that each case is unique, carrying defenses and penalties specific to your circumstances. He will guide you through the process of a successful criminal defense against felony charges. Call Columbus Criminal Defense Attorney Adam Burke at (614) 280-9122 for your free consultation.

Facing felony charges can be a traumatic experience, especially if it is your first time. You must keep calm, remember your rights, and contact a lawyer as soon as you can. A criminal record with felony on it can make it difficult for you to find employment in the future. It is imperative that you contain the damage as much as possible. Follow legal counsel when necessary and understand your case thoroughly.

You may be facing felony charges in state court (which is the most common) or even federal court. If you are convicted of a felony charge, you may go to prison for a significant period of time.

You may also have to pay large fines, depending on the crime you have committed. Even the least severe felony involves a mandatory stay in prison.

If you have been accused of committing any of the crimes given above, you are likely facing a felony charge. Here is a small guide explaining how the state of Ohio views the most common crimes in more detail.

Breaking and entering is considered to be a felony of the 5th degree, the least severe felony possible. If another person was present on the premises, if aggravated burglary was committed, if a weapon was involved, or if someone was harmed, the severity of the crime, and subsequently the penalty, goes up. 1 2

An aggravated burglary occurs when there is someone present in the property and either there is a deadly weapon with you or you threaten to cause harm to the person occupying the property. It is considered a 1st degree felony. 3 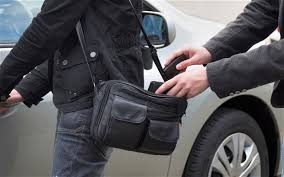 The state of Ohio considers you to have committed felony theft if you knowingly and intentionally deprive a person of his property or his services. This is done without the consent of the owner. Theft may be committed through deception, threats, and misdirection.

Depending on the value of the property stolen, theft may be considered to be anything from a 5th degree felony to a 1st degree felony. 4

In Ohio, if you receive, keep, or dispose of property that has been taken against its owner's permission or knowledge, then you can be found guilty of receiving stolen property. This has to be done intentionally.

Drug abuse attracts major penalties in a state court of Ohio as well as a Federal court. Penalties assigned by the federal court are far harsher and have more of an impact on a person's criminal record.

Drug related crimes include possession of controlled substances or drug paraphernalia, drug tampering or trafficking, and illegal manufacture of drugs. If you commit any of these crimes, you may be tried by either the state court or the federal court, or in rare cases by both. If one were to come across this situation, then they might need a drug crimes attorney las vegas, or an attorney from the state in which they are tried to handle the case.

Drug related crimes are usually all charged as felonies. Drug trafficking, manufacture, possession, and tampering especially are the gravest of felonies. On the federal level, a person, if convicted, may even be assigned a life sentence for a drug crime. 6

In the state of Ohio, you are guilty of committing assault if you knowingly cause harm, attempt to cause harm, or recklessly cause harm to someone or someone's unborn. A simple assault is usually a misdemeanor. However, if assault is committed against an officer, a firefighter, or a medical professional, it is considered to be a felony of the 4th degree.

Murder: By Ohio law, you are guilty of murder if you purposely cause the death of another or you terminate a pregnancy unlawfully (assuming certain conditions are fulfilled). In Ohio, murder may be punished by life imprisonment or death. Cases involving voluntary manslaughter and involuntary manslaughter, on the other hand, are treated as felonies. 8

Rape: Generally, if you engage in sexual conduct with another person by force or by threat of force, then you are guilty of rape. In Ohio, it is considered rape if the act involves a person who is under 13 years of age. Depending on the case, rape may be charged with a 5th degree felony, a 4th degree felony, or a 1st degree felony. 9

Robbery: By Ohio law, if in an attempt to commit a theft or while getting away after committing a theft, you happen to have a deadly weapon on you, or if you threaten to harm a person, or if you harm a person, you are considered to be guilty of robbery. Robbery is generally treated as a felony of the 3rd degree or 2nd degree, depending on the case. 10

White collar crimes are fairly common in the state of Ohio. If you are accused of committing a white collar crime involving an insignificant sum of money, you may be tried by the state court. The federal government only steps in when the sum involved is astronomical, when public figures are involved in the crime, or if the crime has been committed across multiple states.

White collar crimes almost always include a financial component. They can be defined as non-violent crimes committed for financial gain. White collar crimes are crimes including, but not limited to, corporate crimes, cybercrimes, bribery, money laundering, embezzlement, tax evasion, public corruption, frauds, and racketeering. They are carried out by people of a certain reputation, hence the term "white collar".

While drinking and driving may be charged as a misdemeanor for the first time, repeated offenses are considered to be 4th or 3rd degree felonies. 12

Carrying concealed weapons is not a major offense. If accused of it, you will be charged with a low level felony charge. Most of the time it is considered to be a felony of the 5th degree, but in some cases if may be considered a felony of the 4th, or even the 3rd degree. 13

Vandalism is also a common crime. You may be charged with felony if you are suspected of having committed vandalism in the state.

It is considered vandalism if you knowingly cause serious physical harm to a private occupied structure, or its contents, or a government operated structure like a public library, or a burial place like a gravestone or a tomb. An example of serious physical damage would be breaking furniture, or destroying markers and doors.

Penalties for Felonies in Ohio

If you are convicted of that felony charge, you will have to serve a mandatory prison sentence. You will also have to pay a fine, which may involve the cost of the prosecution undertaken against you.

If you have been charged with felony, it's not the end of the world. Even if you are charged with a major felony, it is possible to get your record expunged, or, erased. You can start over again with a clean sheet. Please note that erased means that your record is sealed away, not open for the public. This makes it much easier for you to obtain employment.

Expungement cases are difficult to prepare, and the state does not grant Expungement easily, but it is a distinct possibility if the case against you was inconclusive in any way. 14

If you face felony charges, you should hire an attorney who is experienced in defending these types of crimes. It is important to discuss the facts of your particular case. Your attorney will cover the options available to you so that you know what can be done for your case. Contact Attorney Adam Burke Llc for your free consultation today at (614) 280-9122.